Dr Jeff Lehmkuhler is Associate Extension Professor in the Department of Animal and Food Science at the UK College of Agriculture Food and the Environment. Jeff grew up on a small, diversified farm in Southern Indiana and has advanced degrees from Purdue and the University of Missouri. Dr. Lehmkuhler’s work focuses on improving the nutrition of Kentucky’s beef cattle herd where he big proponent of the use of improved forages like alfalfa.

He is a patient and insightful mentor for farmers and county agents alike and received the 2016 Southern Section American Society of Animal Science Extension Award for his accomplishments in outreach efforts. Dr. Lehmkuhler developed the Master Stocker Program, is Co-Chair of the Master Grazer Program Committee and is an integral part of many others.

Mark’s quality alfalfa and alfalfa-grass hay has been recognized several times by the Kentucky Department of Agriculture and the Kentucky Alfalfa Conference. Mark has also be very active in the Kentucky Forage and Grassland Council including serving on its board of directors. 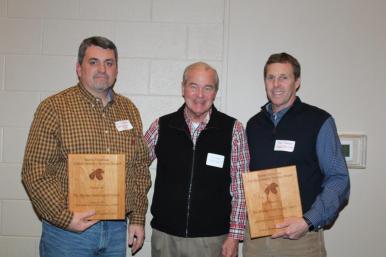 The Warren Thompson Industry Award for 2018 is presented to the Akridge Farm Supply Family. Established in 1933 by T.R. (Ruble) Akridge, the Akridge Farm Supply Store has been the source of quality feed and seed for the farmers of the Fredonia Valley of Kentucky. Beginning with a General Store in Fredonia, the family business now has a second location in Eddyville. What began as a General Store has grown into a full service agri-supply business.

Akridge farm supply is truly a family business, extending to the fourth generation. Ruble Akridge’s son Dean came into the business in the 1960’s and grew the business to the size it is today. Now the business is actively managed by Ruble’s grandson Paul (Eddyville) and Gary Holland (Fredonia).

Akridge Farm Supply has been supplying alfalfa seed to the farmers of the Fredonia Valley for over 75 years.